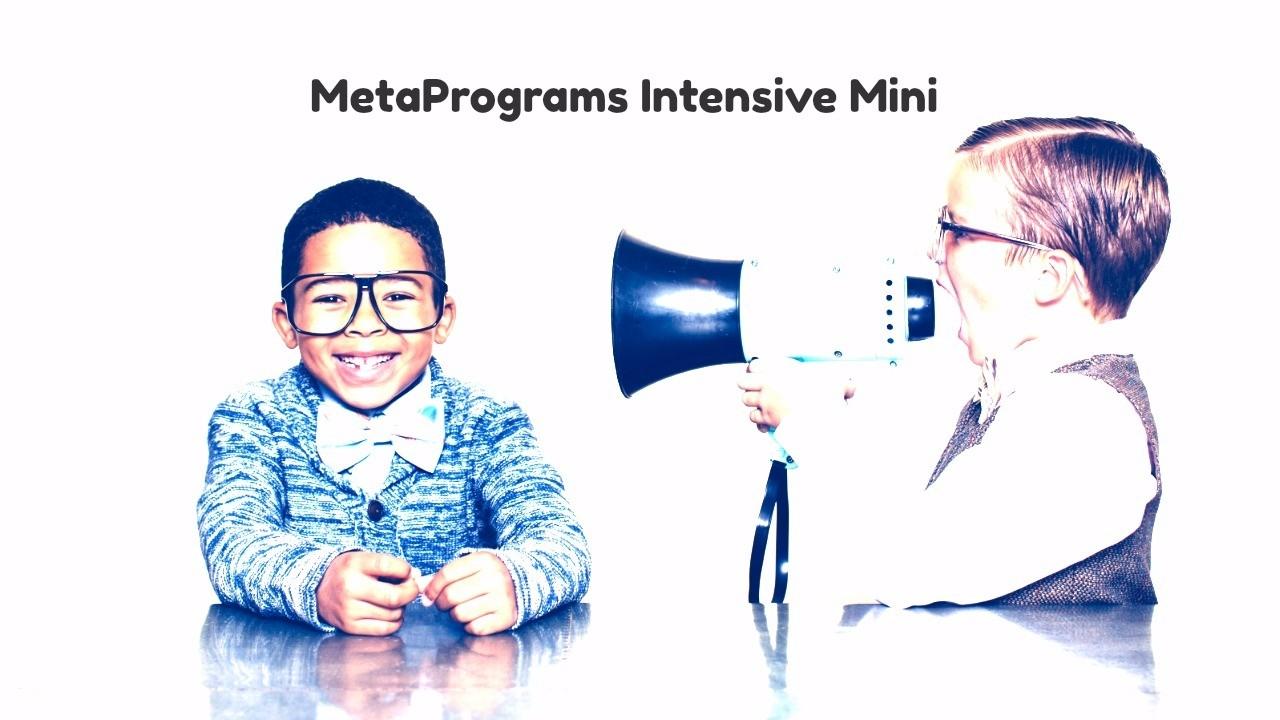 MetaPrograms Intensive Mini-Course (from "The Art of Influence")

This mini-course is a package of five videos covering almost three hours of training that were recorded during the "Art of Influence" Summer Intensive at Acuity World in Holte, Denmark on 9 August 2017.

MetaPrograms are an integral part of the NLP communication toolkit and a powerful tool for building rapport and influencing others. As natural language patterns that point to perceptual sorting patterns MetaPrograms lay on an oppositional continuum, e.g.: between sorting for similarities or differences.

Joseph's take on how to think about, organize and use MetaPrograms is both unique and much more powerful than the way most people have been taught about MetaPrograms and learned to use them.

Rather than thinking about MetaPrograms as singular and distinct, Joseph presents a unified model of how to use MetaPrograms at the "deep structure" level that determine how people sort and process perceptions before language.

Essentially the way Joseph presents this way of work with MetaPrograms is as a constellation of MetaPrograms that are operating simultaneously and creating what amounts to a collective Deep MetaProgram. What makes this way of thinking about, organizing and using MetaPrograms so powerful is that when you are able to elicit and calibrate the Deep MetaProgram you know something about how the person you're working with creates and interacts with what they think of as reality.

When you get behind someone's perceptual model of reality you can profoundly influence them verbally and non-verbally using the knowledge of them you have ... that they are very unlikely to know about themselves!

In this package of five videos Joseph will literally walk you though the entire model you need to begin to think about, organize and use Deep MetaPrograms as he will lay out for you here.

Video #1: The Continuum Of MetaPrograms As A Whole Form Model (26:33)
Becoming A "Lazy Influencer" And Getting Your Outcomes By Doing As Little as Possible

Video #2: Deep MetaPrograms As A Way Of Modeling The World (27:25)
Moving From The Surface Structure Of Language To The Deep Structure Of Perception, Cognition And Communication

Video #4: Deep MetaPrograms As A Way Of Accessing And Bypassing Clusters Of Beliefs (44:14)
Using Unconscious Learning And Decision Making Strategies To Create Patterns Of Influence And Persuasion

Video #5: Using The Structure Of Deep MetaPrograms To Create Outcomes For Yourself And With Others (39:13)
Understanding Language, States And Beliefs As Levers And Obstacles Of Influence And Persuasion

Take your time, go for the ride, and find yourself on the other side with an awareness of how to "read" people and how they think about and make decisions, in a way that very few folks have ever come into contact with before ...